This recipe is a holdback from our New Year’s Eve celebration. Poor planning necessitated a few New Year’s recipe alterations. Namely, my lack of vegetable oil for frying the shrimp led to baking, which produced a delicious (and lower-fat) coconut shrimp, but not exactly my ideal result. I strive to present you with the ideal. So, I reserved this recipe until I had the opportunity to prepare it as planned.

The first time I ever made coconut shrimp was for a Caribbean-themed bridal shower, which I threw in honor of my sisters, who were having a double cruise-ship wedding. At the time, I used a recipe for beer-battered coconut shrimp which I’d found online. I’ve since developed my own buttermilk-based recipe, but I fully stand by the battering idea. A quick dip in a bit of batter helps the coconut to adhere to the shrimp and produces a fantastic, doughy coating around the shrimp.

To save a bit on the fat and calorie count, you can bake these little guys in a 400 degrees oven for about 15 minutes or so, until the coconut begins to turn golden and the shrimp is fully cooked. But, hands-down, my preferred method is frying. Go ahead and indulge! A sweet and spicy Pineapple Chipotle Dipping Sauce makes the perfect accompaniment to these tasty shrimp.

For the Dipping Sauce

To prepare the batter, combine flour and baking soda. Stir in the buttermilk and eggs until well blended. Season with a dash or two of Creole spice blend.

To prepare the shrimp, arrange a plate of flour, the bowl of batter, and a plate of the coconut. Holding by the tail, press each shrimp in the flour to lightly coat. Then, dip into the batter and allow the excess to drip away. Press into the shredded coconut to cover both sides. Place the coconut-coated shrimp onto a baking sheet until you’ve prepared all of the shrimp.

Heat about an inch of vegetable oil in a large frying pan, over medium heat, until it’s good and hot. Place several shrimp in the hot oil and cook for 2-3 minutes on each side, until the coconut is golden brown and the shrimp is fully cooked. The oil should sizzle around the shrimp as it cooks. If the coconut browns too quickly, reduce the heat.

Prepare the dipping sauce by blending the pineapple preserves and chipotle peppers in a blender, food processor, or with an immersion blender. Adjust the quantity of chipotle peppers based on your desired spiciness. 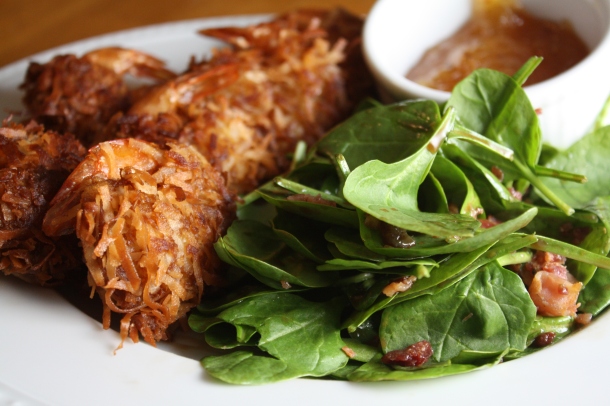 Serve the shrimp with a simple baby spinach and bacon salad, dressed in a honey balsamic vinaigrette.