Sweet Corn and Shrimp Ravioli in a Chive Butter Sauce

I’m constantly intrigued when I come across a recipe which calls for using wonton wrappers to make ravioli, but I’d never actually tried it. Until today. One of the most appealing aspects to me was the ability to encase anything I could imagine, inside a ravioli…anything! Then yesterday, I was snacking on a cold, leftover ear of corn on the cob; sweet, delicious corn on the cob. And it hit me! I want to put this corn in a ravioli. With shrimp. And ricotta cheese.

So, that’s what I did! And they were really good. The filling was delicious and the wonton wrappers were surprisingly easy to work with. It took a little time to get everything together, but was very easy to do. The cooked raviolis were much more delicate and slippery than I’d expected, but not in a disappointing way. Overall, the dish had a very light and fresh feeling. I’ll definitely be making more ravioli creations soon! 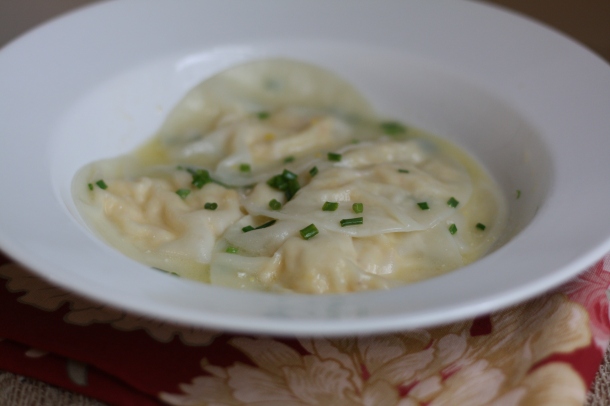 Sweet Corn and Shrimp Ravioli in a Chive Butter Sauce

To make the filling – Blend the shrimp and corn to desired consistency in a food processor or with an immersion blender. (I left mine fairly chunky.) Stir in the ricotta cheese. Season with a bit of salt and pepper. Taste the mixture and adjust seasoning, if desired.

To build the raviolis – Lay out 30 wonton wrappers on wax paper. Place about a tablespoon of the filling in the center of each wonton. Then, one at a time, pick up another wonton wrapper.  Use a pastry brush to paint one side with a bit of water. Line it up and place it over the filled wonton wrapper, wet side down. Press around the edges to seal it. Repeat with all wonton wrappers. If desired, use a round cookie cutter to cut the ravioli into circles or you can leave them as squares.

To cook the raviolis –  The cooked raviolis are very delicate and will not handle being cooked in one large batch. I recommend cooking them in 4 smaller batches and saucing each batch individually with the chive butter. Bring a pot of water to a simmer. One at a time, place 7-8 raviolis in the simmering water. Cook for about  3 minutes.While the raviolis are cooking, melt 1 Tbsp butter in a pan. Add a pinch of the chopped chives. Stir and then turn off the heat.When the raviolis have finished cooking, use a slotted spoon to remove and drain each ravioli. Place each ravioli into the pan with the butter and chives. Once all raviolis in the batch have been removed from the water and placed in the pan, give the pan a little shake to coat with the butter sauce. Slide the raviolis and butter sauce onto the plate. Repeat until all of the raviolis have been cooked. Serve immediately.

Remember how excited I was about being able to fill raviolis with anything I desire?  Here’s what I’m working on next…