I have a confession to make. This post isn’t really about potato soup. It’s about bacon. I just wanted bacon, anything with bacon. After a bit of brainstorming, I decided upon baked potato soup with bacon flavor cooked into the soup and crispy bits of bacon sprinkled on top. Served with a side of leftover pepperoni pizza salad, my bacon-topped baked potato soup was pure comfort in a bowl. 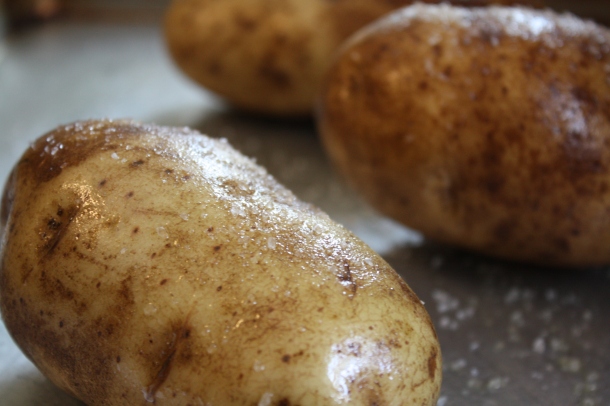 Preheat oven to 375 degrees. Thoroughly clean potatoes. Use the tip of a knife to puncture the potatoes a few times on each side. Rub the potatoes with olive oil and sprinkle with salt. Place the potatoes on a baking sheet and bake for about an hour, until the potatoes are tender, as tested by inserting a knife into the potato. Cut in half and allow to cool.

When the potatoes are cool enough to handle, scoop out the tender potato and discard (or eat) the potato skins. Gently smash the potatoes. Add the sour cream. Use an immersion blender to blend the mixture or transfer the mixture to a food processor or blender to combine. Add the milk and blend. Add more milk, if desired, until the soup reaches your desired consistency. Season with the salt and pepper, to taste.

Over medium/medium-low heat, warm the soup for a few minutes, until it begins to gently bubble. Serve topped with shredded cheddar cheese, crumbled bacon, and chopped scallions. 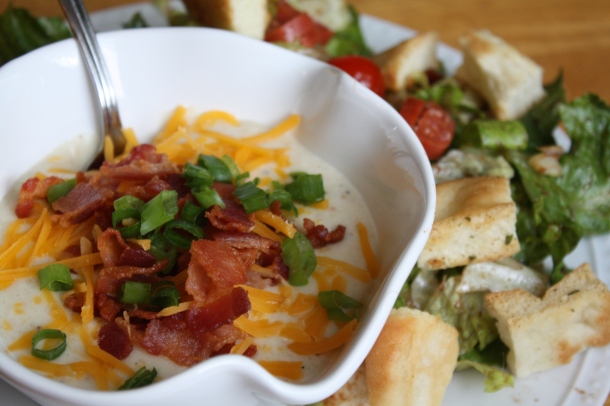