I must be dreaming about fall lately. Perhaps it’s the cool evening breeze coming through the barely opened windows, just enough to adjust the temperature in the room to perfect down-comforter weather. Whatever it may be, I’ve been waking up with fully formed fall dishes on my mind. Well, almost fully formed. The details take a moment to come to me, almost in the way you have to strain to put together the pieces of a dream. 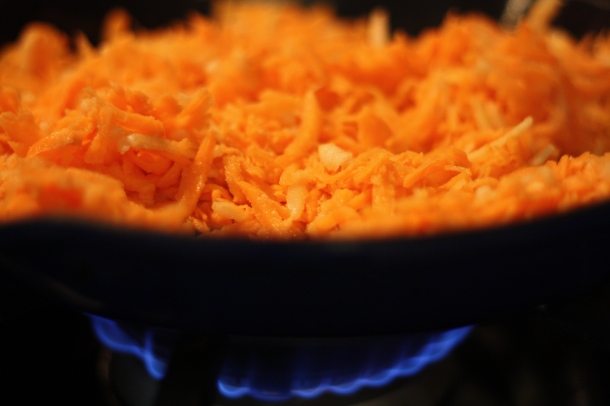 Most recently, I awoke thinking of honey-glazed salmon. Yes, that sounds good. With pureed sweet potatoes. Correction; pureed gingered sweet potatoes. Wait, that’s still not right. It should be a sweet potato hash with apple. Yes, that’s it… Honey-Glazed Salmon with Gingered Sweet Potato and Apple Hash. I didn’t decide to add the balsamic until I actually got cooking. And it was a wise addition, indeed.

There’s not much else to say about this dish. It’s simple, delicious, and perfectly fall-icious.

Preheat oven to 400 degrees. Place the salmon fillets in a baking dish and season with salt and pepper. In a small bowl, combine the honey and vinegar. Stir until well combined. Pour the mixture over the salmon fillets. Place the baking dish in the oven. Cook for 15-20 minutes, until cooked through. Periodically spoon some of the honey-balsamic mixture over the fillets as they cook.

For the hash, peel the potatoes and apple. Use a box grater to shred the potatoes and apple. Combine with the grated ginger. Toss with a bit of lemon juice to prevent the apples from browning. In a large skillet, melt the butter over medium heat. Add the sweet potato mixture and cook for 10-15 minutes, stirring and flipping often to prevent burning. Season with salt and pepper, as desired.

To serve, place a mound of the sweet potato-apple hash in the center of the plate. Place a cooked salmon fillet on top. Drizzle with a bit of the honey-balsamic sauce from the baking dish. Garnish with sliced green onions.