During my college years, I bartended, waitressed, and cooked (often simultaneously) at a local bar and grill. The menu included standard bar fare; burgers, grilled chicken sandwiches, french fries, chicken wings… You get the idea. Among the appetizer choices were Jalapeño Poppers; like the kind you can find in the frozen food section of your grocery store. We served the cream cheese variety; my personal favorite. During my time there, I became a little addicted to those spicy little poppers. An order for six would come in, but I’d throw seven in the fryer. Quality control is important, you know. Between those cheesy jalapeño poppers and french fries dipped in wing sauce, I’m lucky I didn’t have to roll myself down the aisle at graduation. 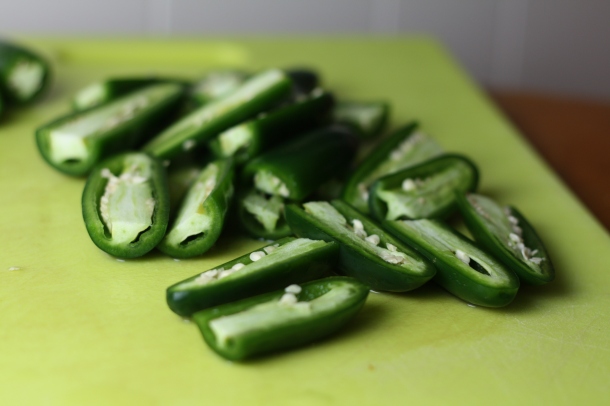 Until last year, those spicy frozen snacks were my only experience with jalapeño poppers. I tried the cheddar cheese variety, but always returned to my favorite cream cheese poppers. And then, during last year’s winter escape to sunny Florida, I landed upon crab-stuffed jalapeño poppers on the menu at a beachside restaurant near our temporary home. These were not the frozen and fried variety I was familiar with. These were fresh jalapeño peppers, stuffed with crab meat, cream cheese, and seasonings; then breaded and baked. The difference in freshness and flavor was astounding.

I’ve been meaning to create my own version of those delicious, crab-stuffed jalapeño poppers ever since that Florida trip. This past weekend, I finally had the perfect opportunity. The result was a fresh, spicy, and satisfying addition to our hors d’oeuvres selection. Definitely keep these spicy little poppers in mind when you’re planning your holiday festivities. They take a little time to prepare, but the resulting fresh, spicy flavor is well worth it. They’re also a proven clear-your-sinuses remedy for the common cold.

Here’s a little tip… One of the reasons I’ve held off on making these crab-stuffed poppers is that my grocery store only carries lump crab meat in 1 pound containers, for a hefty fee. Occasionally they’ll offer an 8-ounce container, but for no great bargain. The popper recipe does not require a large quantity of crab, which potentially leaves you with a considerable quantity of pricey leftover crab meat. One option would be to whip up some Jumbo Lump Crab Cakes, which make another great appetizer in miniature form. An even easier alternative, as I discovered this weekend, is to simply double the filling in this recipe and turn the leftovers into a really spectacular warm crab dip. Simply spread your leftover filling into a baking dish and bake until bubbly. Serve with chunks of baguette or crackers.

Preheat oven to 350 degrees. Rinse jalapeño peppers, cut off the stem, and cut in half lengthwise. Use the edge of a teaspoon to remove the ribs and seeds from the peppers. In a bowl, combine the cream cheese, cheddar, crab, and seasoning until well blended. Fill each pepper half with a small mound of the mixture.

To bread the peppers: Arrange a plate with flour, a bowl of the beaten eggs, and a plate of bread crumbs. Stir the salt into the bread crumbs. Roll each pepper in the flour, then dip in the egg, then roll in the bread crumbs. Place the breaded, stuffed peppers onto a baking sheet.*

Bake for about 35-40 minutes until the outside is golden brown and the filling appears bubbly. 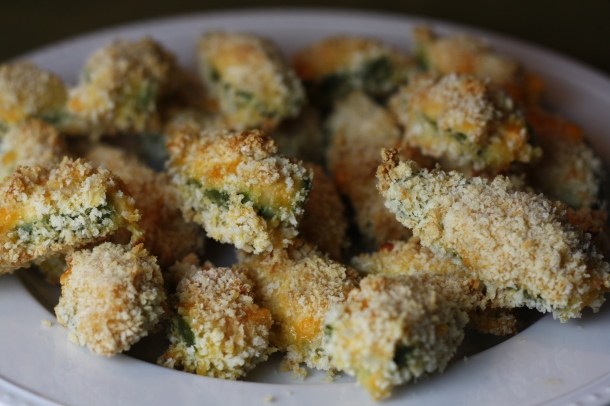