Traveling with my three siblings and I must surely have been a nightmare for my parents. We didn’t have the modern technology which exists today to keep kids occupied on car rides…no Nintendo DS, no portable DVD players, no iPads. Just the four of us in the backseat, bored out of our minds, trying to stay occupied by playing alphabet games with license plates and billboards. Inevitably, we’d become bored with these games and spend the remainder of the trip arguing about who was looking out whose window and irritating our parents with Are we there yets.

As a parent, I have no such problem. When we upsized our vehicle a few years ago, to accommodate our growing family, we made the wise choice in getting a vehicle equipped with a second row DVD player. The best feature, from our perspective, are the wireless headphones, which enable the kids to listen to their endless Ghostbusters marathon (important business around here) while my husband and I listen to gory audiobooks about the zombie apocalypse and other such serious matter. Everyone is happy, except perhaps the baby who is still rear-facing, sadly staring at the back of the seat.

With these headphones, my kids are practically silent in the car. I talk to them. They are unresponsive. I point out cool things along our drive. I get nothing. I tell their favorite jokes (which at the time consists of just shouting bananapants). Not even the slightest giggle. 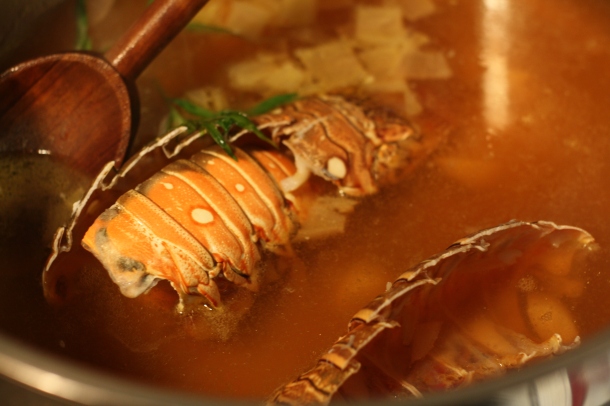 The only time we encounter a problem is if someone forgets to grab their headphones before we hit the road. Like yesterday. When we got in the car to drive the half-mile (literally) to the grocery store. It all happened so fast.

I need my headphones.

I don’t have my headphones.

But, I can’t hear the ghostbusters.

By the time we’d reached the store, my three year old was in the middle of a full tantrum. He refused to get out of the car. Negotiations were had before proceeding with our grocery trip. Note to self: Make sure everyone has their headphones before pulling out of the driveway. Or suffer the consequences. 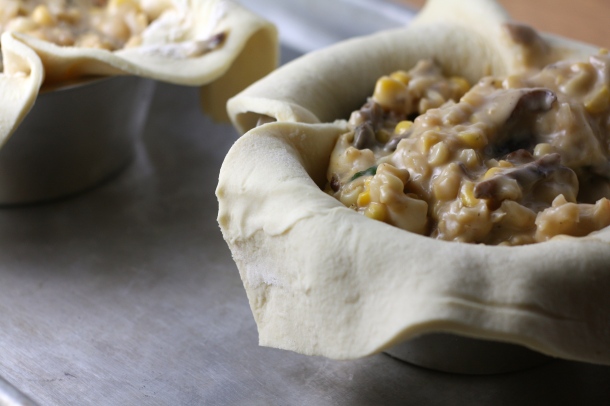 Since the baby has managed to make himself virtually unbabysittable, through his refusal to take a bottle and his terribly unpredictable sleep patterns, going out to dinner on Valentine’s Day was not a viable option for my husband and I. Luckily, I like to cook. So I made us these delicious lobster pot pies. A creamy filling made with fresh lobster, sweet corn, and gourmet mushrooms gets wrapped up in a tender puff pastry shell. The sauce is made from a store-bought seafood stock, which is then simmered with shallots, garlic, madeira wine, tarragon, and the lobster shells until it’s reduced by half and layered with flavor. (Simmering any store-bought stock with veggies and other ingredients is a super simple way to enrich its flavor.) This comforting pot pie makes an elegant option for a quiet date-night at home.

To prepare the lobster: Preheat oven to 450 degrees. Use a pair of kitchen shears to snip the tops of the lobster shell down the middle. Loosen the meat inside the shell, then pull it out so it sits atop the shell. Place the lobster tails in a baking dish and drizzle with melted butter. Cook for 12-15 minutes, until the lobster reaches 145 degrees. Remove from the oven and cool. Remove the lobster meat from the shells and cut into small pieces. Save the shells.

To prepare the enriched seafood broth: Heat olive oil in a large pan over medium heat. Add the shallots and garlic. Cook for a few minutes. Add the madeira wine to the pan. Then, add the seafood stock, lobster shells, and tarragon. Simmer, uncovered, for about 20 minutes, until the liquid has reduced by half. Strain the broth. Discard the lobster shells, garlic, and shallots. You should be left with 2 cups of broth. (If you have less than 2 cups, add a little water. If you have more than 2 cups, simmer until only 2 cups remain.)

To prepare the lobster pie filling: Wipe out the pot you used for the broth. Then, melt the butter over medium heat. Add the mushrooms and cook for 7-10 minutes, until tender and a bit golden. Sprinkle the flour over the mushrooms. Stir to coat. Cook for a minute or two while stirring. Gradually add the warm broth the pan, whisking constantly. Bring the mixture to a simmer. Cook for a few minutes, until the liquid thickens, similar to a gravy. Add the heavy cream and continue simmering for another 3 minutes or so. Add the corn and lobster. Season with salt and pepper, to taste. Allow to cool at room temperature until warm or refrigerate until using.

To prepare the pot pies: Preheat oven to 375 degrees. Spray two mini pie pans with non-stick spray. Slightly roll out each of the puff pastry sheets, so they are about 1/8″ thick. Cut the pastry into squares, big enough to fit the pie pan. (Once inserted, the pastry should come up to all edges, with four larger corners that will be folded over the top.) Press the pastry into the pie pans. Fill each pie with a generous scoop of the filling. Fold over the four pastry corners and gently press together in the center. Place the prepared pies on a baking sheet. Bake for about 35-40 minutes, until the filling is piping hot and the crust is golden brown and fully-cooked.

And for dessert…my World’s Simplest Fudgey Brownies, cut into heart shapes, and served on a bed of raspberry coulis. 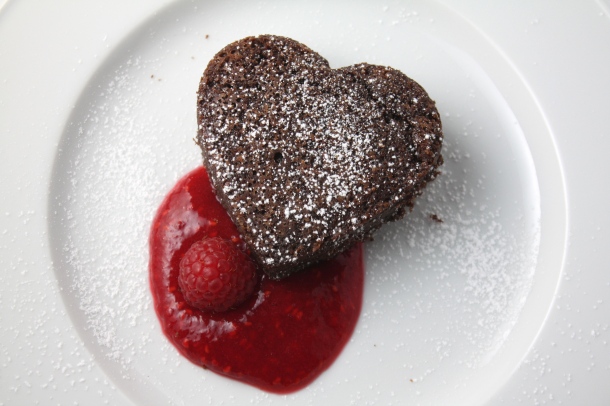