Is anybody else planning on getting their two-year-old a Harry & David fruit basket for Christmas this year??

I’m guessing I might be the only one, and yet, I’m 99.99% certain that it will be his favorite gift, by far. The kid is ridiculously in love with fruit.

In fact, on Halloween, we stopped by my sister’s house to trick-or-treat. She handed each of the boys a piece of candy from the bowl of treats by her door, before remembering that she had an ultra-ripe Harry & David pear for my littlest guy. She ran into her kitchen to grab the foil-wrapped gem, then handed it to my little James, who literally threw the piece of candy over his shoulder like a piece of worthless garbage, in exchange for the tender pear.

I expect him to be as excited over his Harry & David fruit basket as the other boys will be over their massive Lego castle and Minecraft video game. 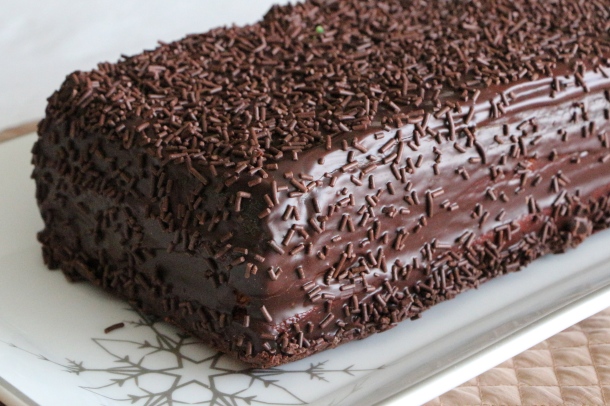 When it comes to Christmas, I am like Walt Disney, carefully masterminding magical moments. While James revels in the magic of an assortment of unusually large, perfectly ripened fruit, I expect the other two boys to be doing giggling backflips over the two-foot-long gummy worm I plan to order or the giant rice krispie treat I found at Target. 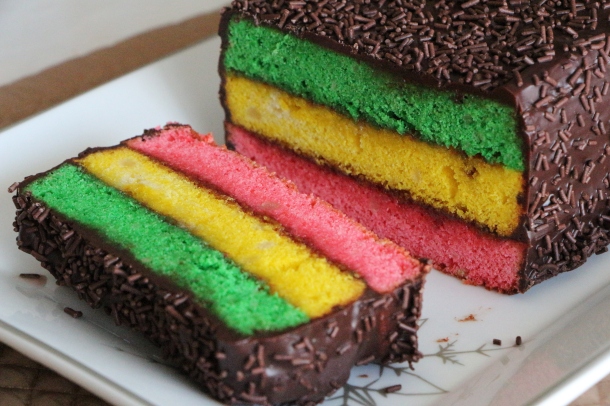 This rich, chocolate-drenched cake is a must-have on any holiday table.

Place the five egg whites into a clean bowl. Beat with an electric mixer until stiff peaks form. Set aside.

In a separate bowl, stir together the flour, salt, and baking powder.

Gradually beat the flour mixer into the wet ingredients. The dough will be quite thick.

Stir one third of the beaten egg whites into the dough. This will slightly lighten the mixture. Then, fold in the remaining egg whites until well blended.

Divide the dough into three equal portions. Use a few drops of food coloring to color one portion red, another portion green, and the remaining portion yellow. *Gel food coloring has the best effect.

Use a spatula to spread each portion of dough into the three prepared baking pans.

Bake on the middle rack of your oven for 20-25 minutes, until the cakes are set and the edges just begin to turn golden.

Allow the cakes to cool for a few minutes in the pans, then carefully invert the cakes onto cooling racks. Cool completely.

Use a long serrated knife to level the cakes, removing as little cake as necessary.

Chop the semisweet chocolate. Heat the heavy cream in a small saucepan or in the microwave, just until boiling. Pour the hot cream over the chocolate, then stir until smooth. Use a spatula to spread the chocolate ganache over the top and sides of the cake. Garnish liberally with chocolate sprinkles.

Refrigerate to set, but remove the cake from the fridge before serving, so it comes up to room temperature. 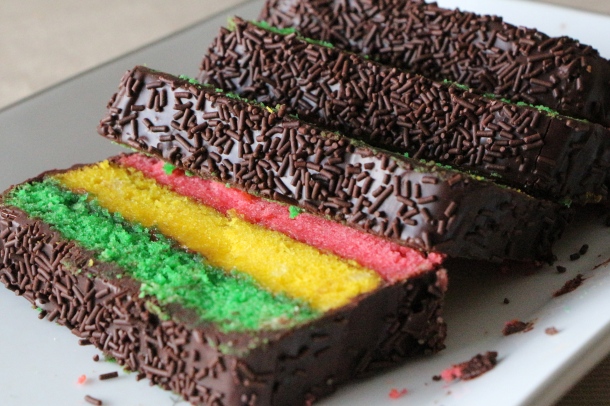