Ever feel like life sort of gets away from you?  You’ve got it all under control and then all of sudden everything around you is in complete disarray? The sheets all need to be changed, there’s something sticky on the kitchen floor, a pile of overdue thank you notes are waiting to be written, and tumbleweeds of dog hair are rollin’, rollin’ rollin’ across the living room floor. You know what I’m talking about? Makes my heart pound just thinking about it.  I’m having one of those days right now.  It’s been coming for a while.  So, today I’ve decided to slow down a bit and catch up with life, get my physical and mental space back in order so I can breathe easily again.

On days like this, it’s nice to have leftovers in the freezer to reheat for dinner. But, in the absence of leftovers, I have a wonderful, simple and delicious recipe to share with you. I was flipping through the channels one day, when I caught the sound of Jacques Pepin’s irresistible French accent. I paused to listen for a bit as he put together his Ragout of Broccolini, Beans and Sausage. It looked so delicious that I immediately ran a search online and found the recipe. There’s even a video at the link, where you can watch Jacques Pepin prepare the recipe along with some other yummy stuff. (Go to about 14:00 on the video for the ragout.) I’ve made this recipe a few times now and it never disappoints. It’s nearly impossible to mess up, so don’t stress too much about the measurements.  A little extra sausage or an extra can of beans is all good.  This ragout is a bit spicy, so if you’re making it for kids or you don’t prefer spicy foods, go ahead and use a mild sausage!

A ragout is basically a main-dish stew; pure and simple comfort food. Jacques Pepin’s recipe calls for broccolini, which is a cross between broccoli and Chinese kale. Broccolini is almost always available in my supermarket.  But, as fate would have it, there was no broccolini available this morning, which left me faced with a substitution issue. There are actually quite a few options, which I think would make suitable substitutions for the broccolini in this dish.  Broccoli, spinach, kale, or escarole would all be delicious.  I chose to use rapini, also known as broccoli raab.  It has a flavor similar to a bitter broccoli, though it’s actually most closely related to the turnip. It’s absolutely bursting with flavor and nutritional value. Blanching rapini in boiling water for just two minutes before adding to the ragout can help reduce some of its bitterness.

Serve this dish with a loaf of hot, crusty bread!

I had the itch to try something new today (in between changing sheets and chasing dog hair tumbleweeds), so I searched around for a recipe for French bread. I’m a total novice when it comes to making bread. So, I bought a French baguette, just in case. When I got home, I threw on my beret (ok, not really) and went about mixing the dough. It seemed way too runny at first.  I was tempted to veer from the recipe and add more of the flour/salt mixture. But, I figured I’d stay the course and see what happened. I didn’t actually believe it would rise. I covered it with a towel anyway and went about my chores. Lo and behold, three hours later, there was a fluffy dough waiting for me. 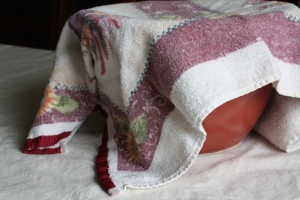 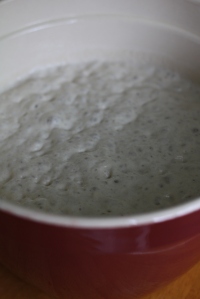 As directed, I added the remaining flour/salt mixture and began kneading the dough.  It was much stickier than I’d anticipated.  My three year old asked me why I was so angry at “that thing”.

Again, I found myself doubting whether this was really going to work.  I covered the dough and waited again.

After an hour had passed, I formed my sticky dough into long loaves, waited the specified 20 minutes, and popped them in the oven.

Bread baking, over a bowl of water

I held my breath for 25 minutes.  Then, opened the oven, inhaled the aroma of freshly baked French bread, and retrieved my hot, delicious prize. Perfectly crusty on the outside. Soft and doughy on the inside. 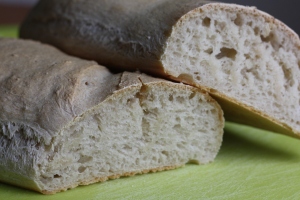