Life is made up of a series of memories; some big, some small, some clearly life-changing, and some seemingly inconsequential. My wedding day, the births of my children, the loss of loved ones…all clearly consequential. But the little memories…like singing the soundtrack to Grease with my sisters while we played on our childhood swingset or selling candy bars outside the grocery store or riding our bikes in the park…turns out that those are just as consequential. We just don’t always realize it in the moment. 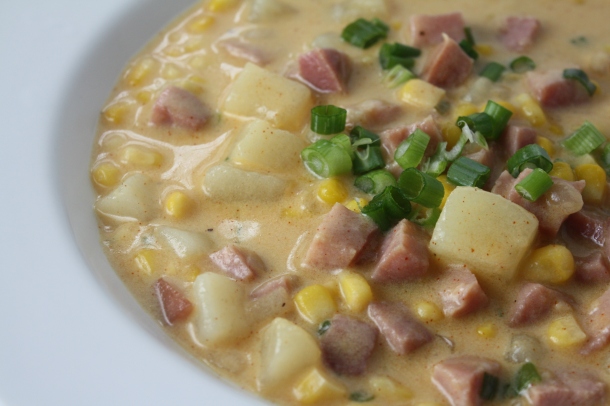 So, I’m lying on the couch last night, glass of wine in hand, playing around on my computer and distractedly watching American Idol, when two of the contestants come on stage and begin singing Islands in the Stream, a duet originally performed by Kenny Rogers and Dolly Parton. In an instant I was transported back to my childhood, in my parents’ room, where my sisters and I used to stand at the foot of their bed, with our toes jammed between the mattress and boxspring, so that when we’d lean forward, the edge of the mattress would catch our calves and we’d suspend there, bobbing forward with our arms outstretched. We’d sway back and forth, mock-gliding over the mattress singing Islands in the Stream at the top of our lungs…with all the wrong lyrics, I am sure.

Such a simple little memory and yet it’s etched in my mind. Because it’s more than the ordinary event of singing a song with my sisters. It was a matter of being together, of laughing, of loving, and of feeling at home. Those are consequential, life-altering sorts of things wrapped in a silly little memory and tied together with a country song. 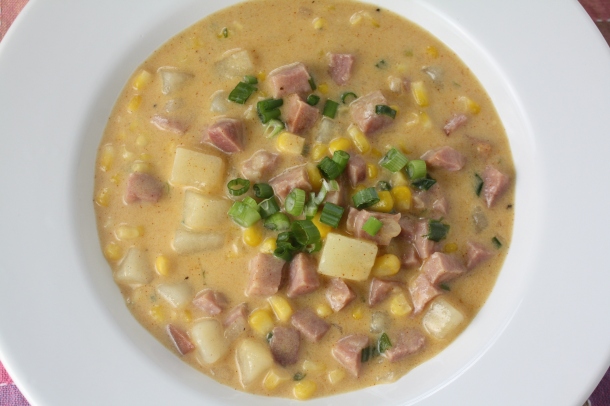 Every morning, our boys come bursting into our bedroom. The baby is usually already there by that point, drowsily enjoying a morning feeding. But the older boys don’t wake drowsily. They wake with a lightening bolt and go 0 to 60 in the moment they open their eyes. They fly into our room in a flurry. They do not stick their toes between our mattress and sing a Kenny Rogers and Dolly Parton duet. They mostly just make animal noises and shout things like underpants. They climb into my armoire. They climb under the bed. They jump on top of the bed. (Just imagine if you released a couple of monkeys into an enclosed space…it’s exactly like that.) Every so often we can convince them to climb under the covers for a snuggle. And sometimes we’re inclined to just send them back to their room because the activity level far exceeds what we’re prepared to handle that early in the morning. But those morning memories, of waking to a family that loves them…those memories matter.

This weekend we’ll be making more memories, the kind that add a bit of mystery and magic to childhood. Though I’ve expressed my half-hearted support for the Easter bunny, he will be visiting our home, hiding eggs, and leaving a basket filled with soft, stuffed-bunny toys, bubble wands, chocolate-dipped marshmallow Peeps, chocolate eggs, jelly beans, and animal crackers hidden under the cellophane grass. We’ll color eggs and make a coconut-covered bunny cake with shoe-string licorice whiskers and a jelly bean nose. It’s tradition. And tradition matters too.

For dinner, we will most likely enjoy slow-roasted lamb with a fresh mint sauce, along with roasted red potatoes, roasted asparagus, and slices of warm French baguette. Our family prefers lamb over ham, but for many families, ham is the star of their traditional Easter feast. With that in mind, I came up with this ham and corn chowder, which would make perfect use of leftover Easter ham. This satisfying soup is worth making, even if you don’t have leftover ham on hand! It’s hard to go wrong with sweet kernels of corn in a warm, creamy broth. Use fresh corn, cut from the cob, if corn is in season or use frozen when it is not. I used frozen corn kernels and it was perfect.

P.S. I just purchased Islands in the Stream from iTunes and have been listening to it on repeat as I write this post. I’m considering teaching it to the boys and showing them how to stick their toes under the edge of my mattress.

Heat the olive oil in a large saucepan over medium heat. Add the onion and garlic. Cook for a few minutes, until lightly golden and tender. Sprinkle the flour over the onions and garlic. Stir to coat and cook for another minute or so. Whisk in the vegetable broth. Bring the mixture to a simmer and cook for about 3 minutes. (The broth should begin to thicken slightly.) Add the ham, corn, green onions, potato, and half and half to the pan. Bring the soup to a boil. Boil, stirring frequently, for 10-15 minutes, until the potatoes are tender. Ideally they should just be beginning to break down (to add extra thickness to the soup) but not so mushy that they’re falling apart. Season with the paprika and salt and pepper, to taste. Serve warm, garnished with additional sliced green onions. 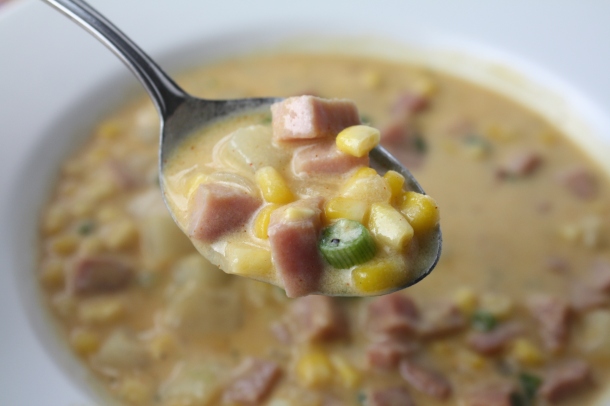 Like typical young siblings, my sisters and I would spend hours of our youth engaging in pretend play scenarios based on our favorite TV shows. Each play session would begin with a tense negotiation over who would represent each character. As the oldest of my siblings, I typically drew a first-pick card, of my own creation. This meant that I was usually Alvin when we played the Chipmunks, Brittany when we played the Chipettes, Lion-O when we played Thundercats, and Stephanie Zinone when we played Grease 2.

Looking back, it now seems somewhat inappropriate that my sisters and I played Grease 2 games in our youth. We truly had no comprehension of the lyrics we belted into the neighborhood, as we swung merrily on our backyard swingset. Three young girls, ages 5-9, singing at the top of lungs, Let’s do it for our country… I’m certain that our parents were sufficiently mortified.

Yesterday, I had a flashback of these memories of my sisters, as I sat watching my two boys play. They’d cleared out half of their toy box and situated themselves comfortably inside. Listening to their conversation, I learned that the toy box was now a pirate ship and they were about to play Jake and the Never Land Pirates, a current favorite Disney show.

And then the predictable negotiation began, led in older sibling style, by my four year old. He explained that he would be playing the part of Jake and his two year old brother would be a character known as Cubby.

But my two year old has never been one to roll over and accept his fate. He responded with an assertive, “NO, I’m Jake!” Even at the young age of two, he has a clear understanding of starring roles and he was not about to play sidekick.

The negotiations quickly dissolved into a chanting match of “I’m Jake” after that. And then they played Legos instead.

Celebrating Easter this past weekend, there were other flashbacks of my youth; hunting for eggs, early-morning candy treats, and discovering the animal crackers, which the Easter bunny always hid at the bottom of our baskets. And best of all…our traditional Easter dessert; bunny cake!

The bunny cake of my youth was always made from a box of yellow cake mix, frosted with a tub of white frosting, coated with coconut, and decorated with a bunny face. In my mom’s version, it was a single layer cake, with ears cut from the second cake round, frosted pink in the center. Two black jelly beans formed the eyes, a pink one for the nose, and shoestring licorice for the mouth and whiskers. An adorable Easter treat. 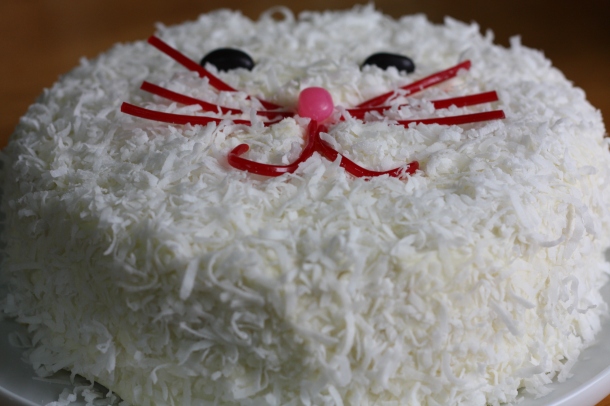 I took a few liberties with my version of a bunny cake. I skipped the ears in order to make a two layer cake, filled with a luscious coconut custard. I coated my cake in a simple cream cheese frosting and the traditional shredded coconut. Our bunny’s face was constructed of the same jelly beans and shoestring licorice I loved in my youth.

He may have lacked ears, but the kids didn’t mind. In fact, with this cake, I have finally managed to impress my discerning two-year-old, who has been unusually generous with his praise of my culinary skills, exclaiming “You make good things, Mommy! You make good things.” Thank you, dear. I try.

This cake works perfectly for a coconut-coated bunny cake around Easter time or a decadent coconut layer cake any time of year!

Preheat oven to 350 degrees. Lightly grease and flour two round cake pans. Combine the flours, baking powder, baking soda and salt. In a separate bowl, beat together the butter and sugar until creamy. Add the eggs to the butter mixture, one at a time, until well blended. Beat in the vanilla. Gradually beat in the flour mixture and milk, alternating about a third at a time, until well blended. Divide the batter equally between the two pans. Bake for about 35 minutes. Cool completely. 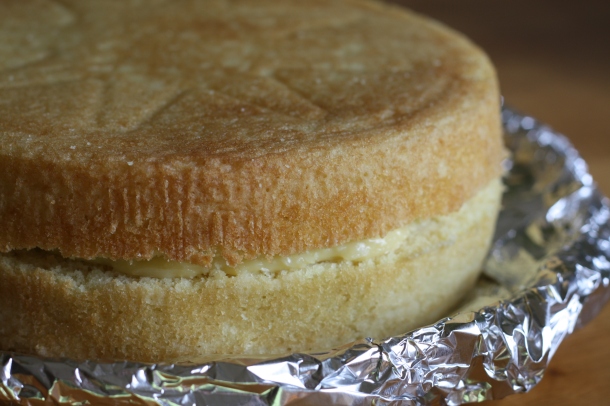 Bring the milk, sugar, vanilla, salt and one tablespoon of cornstarch to a simmer over medium heat, whisking frequently so that the sugar and cornstarch dissolve. Then, reduce the heat. In a separate bowl, whisk together the egg yolks and remaining tablespoon of cornstarch. Gradually whisk about 1/2 of the hot milk into the egg yolk mixture, starting with a slow drizzle. (Gradually incorporating the hot milk into the egg yolks tempers the eggs, allowing them to slowly rise in temperature without scrambling.) Gradually whisk the egg mixture into the remaining hot milk in the pot. Bring to a gentle boil over medium heat, whisking constantly for about 3 minutes, until thickened and smooth. Stir in the shredded coconut. Allow to cool at room temperature until only slightly warm before spreading onto the cake.

Beat together all ingredients until smooth. 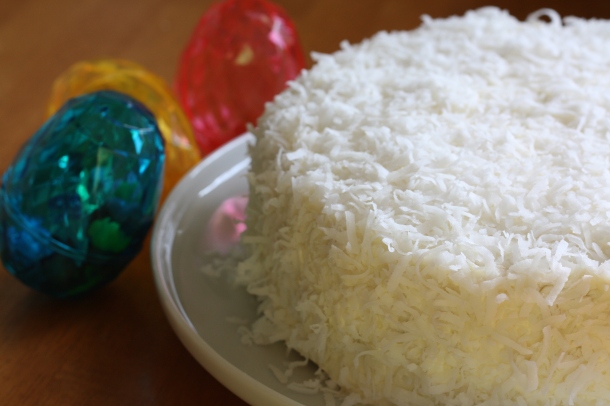 To assemble the cake: Carefully slice off the rounded tops of both cakes. Line the edges of a plate/platter with foil or wax paper to keep the plate clean while you frost the cake. Place one cake round, cut side up in the center of the plate. Spread the slightly cooled custard across the cake. Place the second cake round, cut side down, on top of the custard. Spread the cream cheese frosting all around the cake. Press about 2 cups of shredded coconut around the top and sides of the cake. Carefully remove the foil or wax paper from the edges of the platter. If desired, use jelly beans and shoestring licorice to create a bunny face on the top. Refrigerate to keep fresh.

**If desired, you can double or triple the custard recipe. Then, slice each cake round in half and spread custard between each layer for a taller, multi-layered coconut cake.

Alternately, you can skip the custard layer and cut the second cake round into bunny ear shapes. Frost the ears onto the other cake round for a full, single layered bunny-faced cake.