My culinary muse is just over 3 feet tall and weighs in at about 34 pounds. He’s the pickiest eater of the bunch, yet has a knack for generating the most interesting recipe ideas, such as Ice Cream Pizza and Vanilla Soup. And then, last night at dinner, he started talking about Pizza Salad. It was perhaps, just a slip of the tongue, as he was awaiting a pizza with the option of salad on the side. But, my interest was piqued. 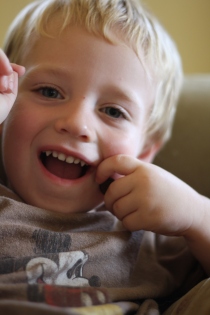 A moment later, my Pizza Salad plan was in place; chunks of pepperoni, fresh mozzarella, and grape tomatoes, tossed with romaine lettuce and dressed with a tomato-balsamic vinaigrette. As a finishing touch, I’d add Italian seasoned pizza crust croutons and a sprinkle of parmesan cheese. The result; a salad oozing with Italian pizza flavors! My little muse is pure culinary genius, though he refused to taste even a bite of his creation. 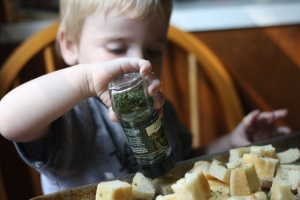 Sometime later in the evening, my tiny inspiration came running at me from the dining room, where his child-sized pretend kitchen is arranged. He had a small plastic pan with a cover in his hands. He was clearly distressed. As he approached me, he lifted the lid on the pan to reveal a single green leaf of plastic lettuce. He was shouting, Oh no! I burned the salad! So, maybe the kid has got a little to learn about cooking, but at least he’s got ideas!

Preheat oven to 375 degrees. Cut a thick pizza crust into large crouton-sized pieces. Arrange in an even layer on a baking sheet. Spray or brush the bread cubes with a bit of olive oil. Sprinkle with garlic powder, parsley flakes, and salt. Bake for about 12-15 minutes until the croutons are golden brown with a crispy exterior and slightly tender interior. 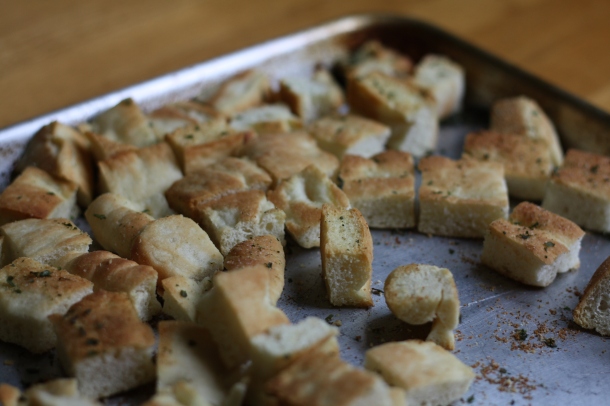 To Compose the Salad

Toss the romaine, tomatoes, mozzarella, and pepperoni in a small amount of dressing to lightly coat. Top with pizza crust croutons and sprinkle with parmesan cheese. 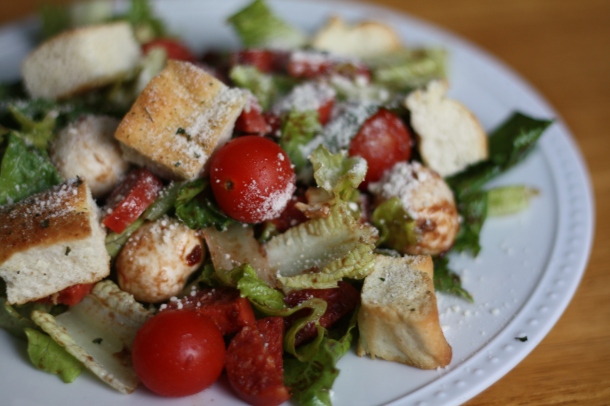