How to Prepare Fresh Pumpkin Puree

When it comes to Thanksgiving desserts, does it get any more classic than pumpkin pie?? Pumpkin is the bright orange star of autumn produce. They play a leading role in Halloween celebrations and an even tastier role at Thanksgiving. As far as I’m concerned, serve whatever other desserts you’d like on Thanksgiving, as long as there’s at least one pumpkin pie. So, in honor of our Thanksgiving Week here at The Gourmand Mom, we’ll be making a pumpkin pie, using my mom’s tasty recipe for Fresh Pumpkin Coconut Pie.

Like many families, we purchased several pumpkins to adorn our front steps throughout October. They lasted out there for a month, until one afternoon, we opened the door to find the remnants of what used to be the Frankenstein pumpkin. We were all a bit flummoxed upon finding the remains. The boys were devastated. What horrific event could have caused the brutal destruction of our little pumpkin; so thoroughly ravaged on our front steps. We all felt a bit violated. But, my husband dutifully cleaned up the remains and we did our best to put the past behind us. And then, the very next day, the vicious pumpkin villian returned. 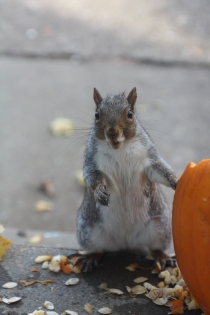 Let’s just call him Squirrely. Squirrely stood there on our front steps, staring at me with his beady little eyes, looking all cute with his fluffy tail. And then he strutted himself over to the next largest pumpkin, and shamelessly went to work. So strong was his passion for pumpkin, that he worked diligently at his task for at least an hour, as we all stood staring in awe. Squirrely was clearly a master of pumpkin. To his credit, he waited a month before devouring our decor. 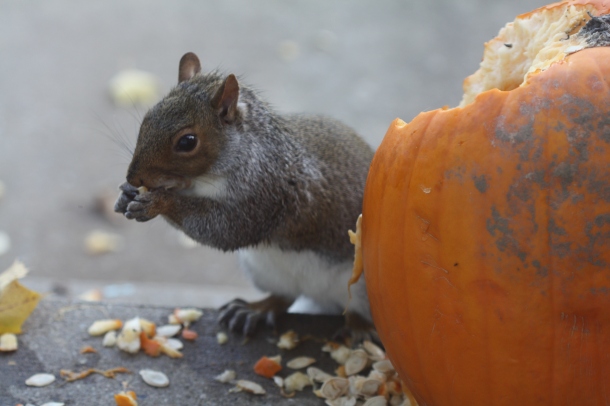 Clearly, I wouldn’t be using any of those pumpkins to make my pumpkin pie. Luckily, our grocery store is well-stocked with pumpkins. For the purpose of making pumpkin puree for pies or other pumpkin desserts, your best bet is to pick up a Pie Pumpkin or Sugar Pumpkin. They are smaller and will produce a less watery, more flavorful result. When my mom prepares the pumpkin for her pies, she typically prepares the puree in a similar fashion to mashed potatoes. She cuts the pumpkin into chunks, removes the skin, boils, then mashes. It’s a technique which has always worked well for her. However, an easier alternative to chopping a hard pumpkin into pieces and removing all of the skin is to roast the pumpkins. Once roasted, the tender insides will scoop out with ease. Here is a step by step guide on how to prepare fresh pumpkin puree by roasting.

2. Ideally, cut the pumpkins in half, from the stem to the base. However, if you happened to purchase the world’s hardest pumpkins or perhaps left your pumpkins in the freezing car overnight, you may have to settle for simply sawing and prying off the top. After trying every one of my very sharp knives on my stubborn pumpkins, I considered inviting Squirrely inside to help. (He clearly knows how to get inside a pumpkin.) Seriously, a hacksaw wouldn’t have cut through my pumpkins. But, eventually I managed to wrestle the tops off. Don’t worry, if you can not manage to cut your pumpkins in half, rest assured that the  pumpkins will roast just as well with only the tops removed. 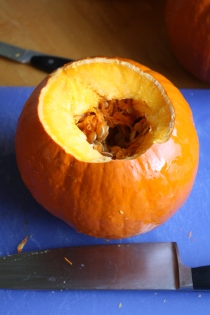 3. Use a spoon or ice cream scoop to remove all of the seeds and stringy parts from the pumpkin. Save the seeds for roasting.

4. Place the pumpkin upside down on a baking sheet (cut sides down, if you were able to cut your pumpkin in half). Fill the bottom of the baking sheet with a thin (1/4 inch) layer of water.

5. Roast at 375 degrees for about 90 minutes. Test by inserting a fork into the inside of the pumpkin. It should be quite tender. Allow to cool. 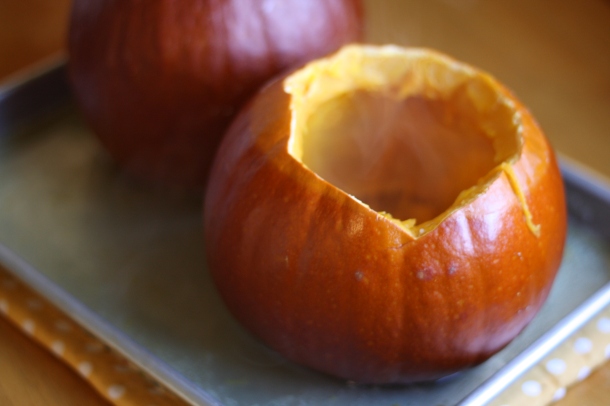 6. Scoop out the tender insides.

7. Use a blender, food processor, or immersion blender to puree until smooth. Refrigerate until ready to use.

If you’re preparing fresh pumpkin puree, be sure to roast the seeds separately for a tasty snack. I seriously ate so many pumpkin seeds yesterday that I’m beginning to suspect I may be sprouting a pumpkin in my belly. They are a delicious and highly nutritious snack.

To roast the pumpkin seeds: Rinse the seeds and separate from the stringy pumpkin pieces. Discard the stringy pieces. Lay the pumpkin seeds in a single layer on a paper towel to dry. Spread the seeds onto a baking sheet. Toss with a bit of olive oil. Sprinkle with sea salt and pepper. Bake in a 375 degrees oven for about 20 minutes. Enjoy!

Stay tuned for the recipe for Fresh Pumpkin Coconut Pie, coming up next!