Bread pudding is sort of a strange love of mine. It’s not something I grew up eating. In fact, I don’t think I’d even heard of it until sometime in adulthood when I ran across it on the dessert table at one of my favorite restaurant’s brunch buffets. I was more than apprehensive at first. Soggy bread?? Yuck. And it certainly didn’t look like any ‘pudding’ I’ve ever seen before. No, thank you.

Then, one day (after a few breakfast mimosas) I felt brave. I took a small scoop of that bread pudding. And forevermore wondered why I hadn’t tasted it earlier.

I’ve made a few variations of bread pudding over the past few years, each time trying to determine what it is that makes me love it so darn much. And I finally figured it out… It tastes like french toast; a big scoop of warm, comforting french toast. But the thing which makes it even better than french toast, especially for serving a crowd, is that the whole mix gets thrown in a dish and baked with little mess or fuss. 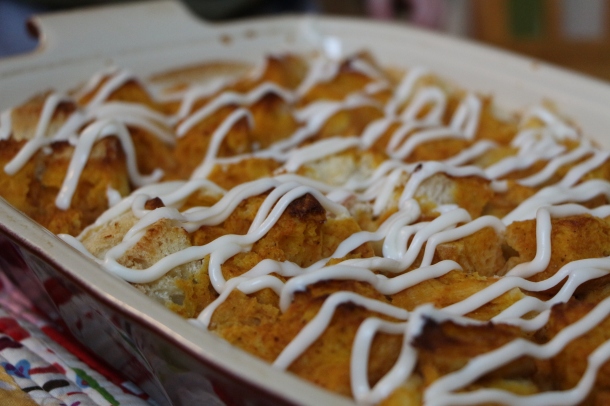 Bread pudding also lends itself quite well towards getting creative – and I love a dish that likes to be played with. Make it with French bread or muffins or challah. I’ve even made it out of donuts! Add vanilla or dried fruits or chocolate chips.

Or seize the pumpkin spice mania and make this pumpkin bread pudding with cream cheese icing. This comforting bread pudding tastes like a cross between a spiced pumpkin pie and a slice of french toast. It’s best served warm, but after more than a few stolen spoonfuls from the leftovers in the fridge, I can tell you with confidence that it tastes pretty fantastic cold too!

It’s easy to make a pastry bag in a pinch by simply using a plastic baggy. This technique works best for fairly soft dressings, fillings, or icings. (Plastic baggies may not hold up well with very firm fillings.) Simply fill the plastic baggy with your dressing, filling, or icing. Squeeze it into one corner of the baggy. Twist the top of the baggy to hold the filling in place. Then, clip the corner with scissors, large or small, depending on your purpose. Now you’re all set to easily squeeze fillings into cupcakes or attractively drizzle dressings, sauces, or icings. The best part about plastic baggy pastry bags is that they’re disposable…no messy clean-up!!

Arrange the chunks of bread in a large baking dish. In a large bowl, whisk together the milk, pumpkin puree, sugars, eggs, cinnamon, vanilla, ginger, salt, nutmeg, and cloves until well-blended. Pour the mixture over the bread chunks. Press down on the mixture so the most of the bread is submerged. (I like to leave a thin layer of unsoaked bread at the top for a nice crust layer.) Allow the mixture to soak for at least 15 minutes. (You can leave it to soak overnight, in the fridge, if desired.)